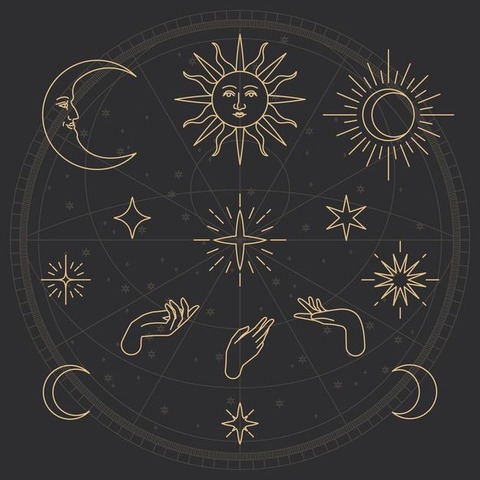 The Moon signifies the essence and energy of life, will power and drive. It makes a person humane, sympathetic and generous. It gives fertile imagination and a stable mind. Astrologers relate professions like sea faring, travelling, children related, jewellery especially dealing with pearls, etc. with the Moon. It is karaka for mind and gives mental strength and prosperity. It relates to your responses, to your partners either in the family or in business. A weak Moon makes thinking clouded, unstable, irritable and unreliable. The Yogas associated with Moon are

As the name indicates, it gives the native the power of a lion and elephant combined. If the Jupiter is in a Kendra from Moon, then the Yoga goes with the name Gaja Kesari Yoga.

The native enjoys a happy disposition, many relatives, polite and generous, head of the Panchayat or Municipality (or) a local Government. The native will enjoy lasting fame and name. The original writer of this Yoga says that the native will build villages and towns. For contemporary outlook, we would consider that the native runs the administration for a village or town. One born with this Yoga may become a member of Municipality or an Engineer. This Yoga cannot be read in isolation. The results ascribed to this Yoga are subject to modification depending on the strength of Yogakarakas.

For Scorpio ascendant, both Moon and Jupiter are Yogakarakas along with Sun. Both Jupiter and Moon are in mutual aspects. Both are without association (or) influence of malefic. Native enjoyed the benefits of Jupiter in particular in his dasa from the age of 43. But of course, the results depend on the residential strength.

One can see, though there is parivarthan between Jupiter and Saturn, Jupiter ends in debilitation. Both Moon and Jupiter are not Yogakarakas for Virgo ascendant. The native suffered from heart diseases during the dasa of Jupiter. He had to undergo multiple procedure and still suffers from heart problems. The native is without a progeny and his efforts to adopt a child also was futile.

If there are planets from the Moon in second house, then Sunapha Yoga is formed. Sun is an exception to this rule. Self made man, equal to a King or King like, wealth with a good reputation.

The Moon plays a vital role in energising this yoga. The second from Moon should be occupied by Jupiter, Saturn, Mars, Venus or Mercury. Again it depends on the strength of the 2nd house and its Lord. Any benefic forming this yoga is likely to give excellent results. The results of this yoga will be experienced by the native in the dasa/Bhukthi of the yoga forming planet

If any planet apart from Sun, if placed 12th from Moon, this Yoga is formed. The native looks handsome, well formed organs, good reputation, generous, respected and enjoys sensual pleasures. Here again, we need to examine whether the planet forming the Yoga is strong and well placed to Lagna. This Yoga, later in life, may lead to austerity and renunciation.

If there are planets on either side of the Moon, then this Yoga is formed. The native will be wealthy, will have conveyance, generous and philanthropic. The person gets money, power and time. Here again, the planet forming the Yoga should be strong and favourably placed to Lagna.

When there are no planets on either side of the Moon, then this Yoga comes into effect. It is an evil Yoga, the native will be unkept, poor, sorrowful, dependent and a wicked person. If the Moon has in its Kendra any other planet, then this Yoga becomes defunct.

If Mars conjoins the Moon, then this Yoga is formed. The native earns through unwarranted means, harsh in his behaviour and will not get along with his family and relatives. But in practice, we find people with this Yoga are wealthy and establish their financial worth. It will be beneficial if the Moon and Mars are in mutual aspects. When Chandramangala Yoga is formed in unfavourable houses, then there will be evil effects and the native will have an inappropriate character.

If benefics are placed in the 6th, 7th and 8th from Moon, then this Yoga is formed. The person will have a happy disposition, trust worthy, affluent, will be courageous and victorious. All the benefic may be in 6th, 7th or 8th and also in any one of the houses in combination. Even if one planet is in full strength, then the native will enjoy power. If there are two or three, then they will live a life equal to a King. In contemporary sense, he will be in an influential position in the Government or large Organization.

We come to the end of Yogas formed by the Moon.

The one who has the hue of curd and icebergs, one who emerges from the milky ocean, Chandra who adorns Shiva, I prostrate. that Chandra.